Kroll swore loudly as the elevator lurched down, grabbing ahold of the gurney to maintain his balance. Looking to the control panel, the captain hurridley pushed the emergency stop button to keep the elevator from suddenly moving again. Next the tercel began to pry at the door, hoping that they were close enough to the next level that he and the Guerrilla could squeeze out. 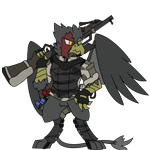 As Kroll pried the door, the lights flickered back on, and the elevator began to rise again. Apparently there'd been some form of power fluke. The elevator reached its destination without any more stops, and the door opened to reveal a room that was oblivious to what'd transpired.

Kroll jumped a little when the lights came back on and the elevator began moving, but when the doors opened, the captain spent no time dwelling on what just happened and quickly pushed the gurney out without a second thought. The captain quickly pushed the Guerrilla down the halls of the medical wing, searching earnestly for a staff member that would be able to assist him.

The passing doctor stopped by Kroll viewed the chart, and took the patient from Kroll to the same area where the assassin had been kept. There, he was attended by no less then three doctors who busied themselves with tending to this patient. Glue waited patiently for some form of orders from his superior.

Kroll followed the doctors in, making sure they were tending to the Guerrilla properly before turning his attention to Glue. "Alright then...I take it he hasn't been much trouble while I was away?" asked the captain as he walked over beside the stallion, prodding at the assassin in the bed with a gentle talon. "Let's see if we can't get a statement from him, shall we?"

Glue nodded his head, and with a pair of electric paddles that he'd found lying about, shocked the snoozing pony into wakefullness. "Captain Kroll needs a statement from you," Glue told the Earth Pony.

The Earth Pony was just a bit bewildered to give a response readily, but he seemed alert and aware.

Kroll sighed as he watched the stallion get jolted awake, waiting until he calmed down to comply. "I want you to relay your knowledge of the Saltpeter family's dealings, as well as the details of the skirmish with the Guerrillas that resulted in the destruction of a hospital, a dilapidated building, and an attempt on the lives of this case's key witness in addition to myself and my associate Aella to Warrant Officer Glue. In exchange for your cooperation, you may find yourself free of the world of crap you currently inhabit. Understand?"

Kroll sighed, rubbing his face in exhaustion. "Start with what you know about the Saltpeters, and work your way into talking about the incident that happened tonight." The captain looked over at the Warrant Officer, shaking his head to deny his request to use the shock paddles on the stallion again.

"Allright, I think I'm followin' you now. I was a bit loopy for a few seconds, had trouble gettin' my bearings right."

"As you said, well, it starts with the Saltpeters I reckon. I don't know how much -you know-, but I'm assuming not much, given that they're still in business. Well, the Saltpeters, are what you call a smugglin' family, though they don't smuggle much, they manufacture. They make black powder in little discrete warehouses all over the city using smuggled ingredients and sell it on the free market for a solid dime.

"Oh, listen to me, prattling on- do you got that bit written down? Yeah? Well, they make their money look legit by squirreling it away in real estate enterprises, so when the tax man comes knocking around, they don't appear to have any affairs out of order. The funny thing is, they've been doing -that- bit since before the war, but I don't reckon you care much about ancient history.

"Anyways, back on topic- stop looking at me like that with those paddles, I still got a good leg to kick you with- anyways, yeah, so sometime about... I unno, a half-year ago? Not entirely certain, I'm not privy to the Saltpeters day-to-day affairs, someone in that family got the reckoning that having griffons on the inside to help with smuggling would expedite the process of moving dangerous muntions across the city. Don't ask me how, or who set that up, but those griffon's, who's maimed corpses dot the landscape of Manehattan, those were the assorted lads that were hired on to help with the smuggle-work.

"You following me, Mister Bird? Should I slow down?"

The captain shook his head before looking over at Glue to make sure the Warrant Officer was recording the stallion's testimony.  "No, no. Keep going as you were. You're doing fine."

"Okay, well glad your following because I'm having trouble keeping track of the things I already said... where was I... oh right, okay, so, I can't exactly reckon why, or who, or what- I'm just the guy that the Saltpeters calls to help things along; but I suppose that at some point in the last forty-eight hours, something went wrong and ponies- no, wait, griffons, griffons just started dying! I think there was some sort of business ruckus, one of the birds spooked and tried to turn rat on the Saltpeters, not entirely certain.

"Well in short work, if I recall correctly, two died at the scene, we hired some chumps who called themselves the "Janitors" to clean up the scene. The rest flew off while we tried to corner em.

"I got hired on to find my way to the hospital and dispose of any loose ends, hence the explosion and subsequent demolition of that wing. Blah blah blah, you don't really care about none of that-" Glue shocked his leg with the paddles and he jolted in the bed briefly. "Okay, aaaaaaah, okay, well, I suppose you do want to know about that.

"Okay, well, it was me, myself, principally, who hauled the explosives to the hospital in a hearst-wagon. I parked it under what I assumed was a pretty good spot, and put a slow fuse on it. Waited maybe, a solid five minutes, and next thing I know the whole building is collapsing, which is well more destruction then I'd anticipated or even wanted!

"Well, I try looking around for any survivors and your pretty bird had managed to drag one of my marks out of the rubble somehow, so I engaged in what I assumed would be a quick scrimmage, tried sawing at his neck with a razor. She got the best o' me, and I had to tail her to figure out where she were going.

"Now believe it or not, we've had someone following you for, I unno, a week now? Not really sure why, but he's been just tailing you, watching your habits, keeping logs of where you shit, pretty typical stuff. I regroup, get word that you're pretty bird and you were meeting up somewhere, so I go out of my way to make yall a little present.

"Getting it set up was a bit easy, given that the building was already scheduled for demolition, but carrying that bow-thing up those stairs was a fucking -bitch-. I think you're fairly privy to the events that followed me attempting to turn you into a reenactment of the late and great Penry Poudini who so infamously died in a knife throwing stunt- so any que-stions?"

Kroll crossed his arms as the stallion finished its diatribe. Hopefully this testimony would be enough to authorize a raid warrant, but only time would tell on that matter. Though the fact that an entire family had been operating an illegal ordnance operation in the city for some time without being discovered was unsettling to the captain, what bothered him more was what the stallion said about someone tailing him. "Are you sure that you nothing about the ind!vidual who's tailing me? Name? Description? Anything?"

"Well its no secret that theres ponies all over you authority types. I don't know who it was, or there name or anything- but there's a lot of money sitting around for ponies with spare time and a lack of regard for privacy. Sorry if its not exactly what you wanted but I could reckon even if you did catch the bastard there'd be another in his horse-shoes in a day or two.

The pony slumped his head into his pillows, keeping his eyes locked on the Warrant Officer Glue, who'd been keeping records and let the paddles fall to the side. "I mean, if its that important to ya, I reckon it'd be a simple matter to get a'hold of em. They are hired ponies, so you'd need to get a'hold of their handlers and pay em off or something."

Kroll shook his head, glancing at the Warrant Officer. "Unless their handlers are the Saltpeters, such a thing will need to wait." Shifting a little, the captain nodded to the stallion in the hospital bed. "Thank you for your cooperation in this investigation. You'll be escorted to your cell to be detained until further notice. Depending on how the rest of this goes, you might be released early..."

Turning back to the Warrant Officer, the tercel spoke. "I need you to prepare and submit a request to conduct a raid on the Saltpeter residence. This testimony should be enough to get The Council's approval."