They continued talking as the train descended the mountain, passing through one tunnel after the next. When they left the last one, Ponyville wasn't quite as visible anymore. The tracks wound through soft, grassy hills obscuring the sight, leaving only the sky to watch. So that's exactly what Shade did, and it didn't take long until she spotted something she didn't like. A small group of flying shadows was approaching the train, barely visible in the moonlight. It took a minute until the filly was sure, but those were guards. And they were definitely intercepting the train.

"We might have a problem", Shade said as the pegasi split up, two of them flying to the front of the train, two to the back. She only poked her head out of the window shortly to see that they were really boarding. "Guards are on the train. We need to get out of here!"
_________________
I am: Silvern Gleam, Skry, Shadowstrike, Falling Star 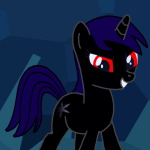 "WHA-" Lanced muffled himself before he got too loud, realising they're supposed to not be on the train right now. He leapted to the window to try and see outside, and assumed there was nothing until he realized there were the side of the hill staring right at him. then got a bit freaked out and panicked his way to a window on the other side of the cart, to realize that's then a long, long way down. Even more panicked he paced his way back in forth trying and failing to come up with anything. "Yeah no I got nothing I got, absolutely nothing. he turned his gaze the the rope tied to the window earlier, and wondered what could be done with it.

Void looked at Shade. Guards? Dammit! She stood up, her broken foreleg held up high, and wanted to say something - though she didn't know what - when Scint started to run from one window to the other. She watched him, making a step forward to follow him before she realized that he wouldn't go a long way.
"Well", she said. "I believe the train is to fast to jump out, isn't it?" For her, of course, it would not be a problem. She could fly. But the other two couldn't.
She thought. "I can't carry you. We have to hide inside the train. I cannot think of something else."
She looked half desperate, half hoping at Shade who most often had the best ideas.

The hill outside suddenly gave way to a valley they were crossing over. The change prompted Shade to look outside again, where she saw moonlight reflecting in a river some way ahead. "Sky, can you carry my saddle bags? I don't want the food to get wet", she asked.
_________________
I am: Silvern Gleam, Skry, Shadowstrike, Falling Star

Scint gulped as he gazed out the window, prompted after hearing Shade's mention of the word "wet." with no change to his panicky expression he started fiddling with the trashcan Skylight suggested they'd use earlier. he knew where this was going.

Sky looked at Shade. "Wet?", she asked, not being aware of the river outside. "I don't know what you are planning now but I think one saddlebag more should be possible if you can put it somehow over mine." Sky, of course, was already wearing a saddlebag over her back. She stood in front of Shade, waiting for her to do something.

"You're not going to fly very well with two pairs of saddlebags on your back. Just hold it in your hooves!" Shade responded, and hastily dropped the bags in front of Sky. Then she climbed out of the window, grabbing its lower edge fiercely to not be pulled away by the air flow. She looked to her right (in driving direction) and below, then back inside. "Lance, get ready to jump on my signal! Quick!"
_________________
I am: Silvern Gleam, Skry, Shadowstrike, Falling Star

When Scint heard his name, he had just pulling a knot he tied to an apparently full plastic bag with his teach, and scuttled over to the window Shade was at. bag in mouth, he spoke through clenched teeth. "Thish ish inshane. Shade yer inshane!" He threw a look of horror; he'd already convinced his body to move at command, but he couldn't quite get his own head to accept what he's about to do yet.

"This is indeed insane. How am I supposed to carry a bag with a broken hoof, Shade?", Sky asked calmy, picking up Scint's murmured words. So far she had understood that Shade wanted them to jump out of the window and Sky - who still hadn't gotten a look outside - hoped for something soft to land on for them. She were to fly which wasn't a problem but the thing with the saddle bag and her broken hoof.
She looked down to the bag and picked it up with her mouth. "I wll tre t sis wa", she tried to say with by a saddle bag clenched teeth. The bag was kinda heavy to be carried by mouth for a long time. "'rry up!"

Shade didn't get to reply to anything as the river the bridge was crossing came into estimated falling range. "NOW!" she shouted and pushed herself off the train. Now, here needs to be pointed out again that the estimation was done by a 10-year-old filly with an admittedly noteworthy amount of experience in jumping and falling, but unfortunately lacking knowledge about airodynamics. So, when she had gotten some first distance from the train, it came as a surprise to her that suddenly the wind seemed to pick up and slow her down faster than expected. It was a disconcerting realization, and if her face had still been visible from the window, her friends would have a look of shock only moments after Shade hat let go. But as it was, the train went on at full speed while she was being dragged to a horizontal stop, and quickly accelerating downwards.

Turning in mid-air revealed that she was still headed towards water, but way too close to the shore for her taste. But nothing to do about that now. She couldn't even contemplate it, because 15 meters of falling simply doesn't give much time. All she could do was to brace herself for impact. Lance definitely would have better chances jumping even a little bit later.
_________________
I am: Silvern Gleam, Skry, Shadowstrike, Falling Star

Scint closed his eyes so he wouldn't have to be too scared by what he saw to jump, and jump he did. aftr doing so, he opened his eyes to see the water bellow, and if he didn't have a plastic bag in his mouth, he would've screamed. didn't stop his hooves from flapping wildly, though.

It was only when Shade jumped out of the window that Sky realized how difficult and dangerous their plan was. The train was at full speed (or that is what she assumed) and Shade was taken by the wind.
She considered the wind, Sky told herself. Of course she did. She is intelligent!! Still Sky was pretty anxious.
But also Scint jumped out and all she could do was follow. So she repositioned the bag in her mouth and flew out of the window.

The wind was heavy indeed and even Sky couldn't get steady at first. She turned around in the air before her wings got hold of the situation. Then she looked around, searching her two friends.

There were two impacts. The first one was already painful. She would have preferred her hooves going in first, but she likely didn't have the water depth to go in diving, and so she had just curled up and came down back first. Not that she had time to recognize how her back was now a mixture of burning and being numb. The second impact wasn't quite es painful, but it only the shock of it made her lose the breath she had kept in a gasp, and the water had already closed over her.

It took a moment for her to realize she hadn't splattered, or even received injury for that matter. But how deep was she? Or... where the heck was up? The river's current had pulled her along, and she was too confused and paralized by the shock of almost dying to get control over herself. She needed air...

Another meeting with the ground finally gave her the orientation she needed. With a strong push she sent herself upwards, and only moments later felt her head going through the surface. First order of business: Taking a deep breath. Then get to the shore. She definitely needed to calm down. This had just been a way too close call.
_________________
I am: Silvern Gleam, Skry, Shadowstrike, Falling Star

...was the sound of Scint landing on the water stomach first, his hooves stretched out in a star-shape. where a normal pony would probably dive into the water on impact, Lance was floating on the water for a few moments, enough for him to groan and almost lose consciousness before sinking at last. though he caught his senses quickly (due to the pain of a burning stomach) and opened his eyes under the water, which then proceeded to burn in their own right, him still not quite familiar with swimming with his eyes open in the water. some more underwater screaming and he started dog-paddling his way above the water while the current tugged at him.

above the water, he caught sight of Shade further downstream, wondering how she got that far ahead, and figured she was heading for the shore, so Scint followed suit. Lance found his way to the shore, still further up river from Shade's position, and felt gravity deciding to make his body heavier, suddenly. he flopped forward, and yelped, realizing his stomach still hurt, and rolled to his side. with an even louder groan, he hoped Shade could hear him shout, "Can we please not do that again?!"

Then Sky saw Shade. Immediatly she headed towards her when her eyes caught Scint. Midflight she stopped, looking alternating at Shade and Scint while the bag in her mouth grew heavier. She couldn't even talk with that thing in her mouth!
Annoyed groaning she turned around and flew towards the shore to get rid of the disturbing object.